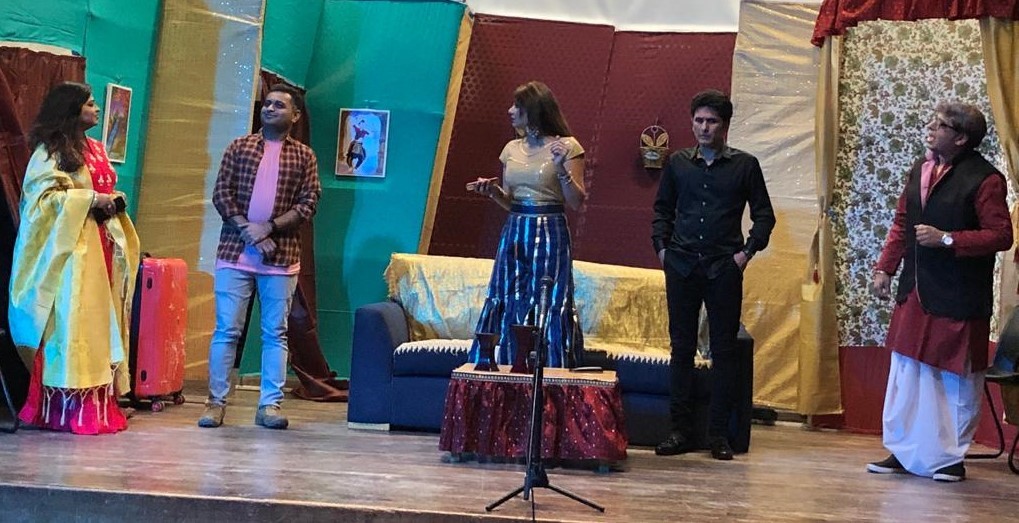 Uneducated Sonal (Ashwini Tekale), with her “backward” etiquette and fashion sense was on the end of some tongue lashing from husband Krupesh (Tarun Kapadia), who resented her lack of modernity and had fallen in love with his secretary Shefali (Bhavini Gandhi). Shefali, a modern, scantily dressed girl obsessed with taking selfies was the complete opposite of Sonal and had a nickname of “Selfieben”. When Krupesh is caught embracing Selfieben he confesses their love for each other and his intention to divorce Sonal.

His father Jagdishbhai (played by stage Director Urvish Parikh) concocts a cunning plan involving a fake NRI from the US, nicknamed “LLTT” (Jishnu Soni) to make Krupesh see the error of his ways.

The play touched on the theme of ‘don’t judge a book by its cover’. Sonal may not have a modern dress sense and the best manners but it is what is inside a person that counts. Sonal was a hilarious character, and when scolded for serving guests with glasses of water not carried on a tray. She returns with a tray full of water. She often had the audience in fits of laughter, as did elderly neighbour Shirin Aunty (Hutoxi Patel) who loved to call on neighbours collecting things from them with hilarious consequences.

Organisers Oshwal North Area committee and EC Trustee Arvindbhai would like to thank the audience for supporting this venture, and to thank Pink Purple Productions for an excellent show.

Photos from the evening: