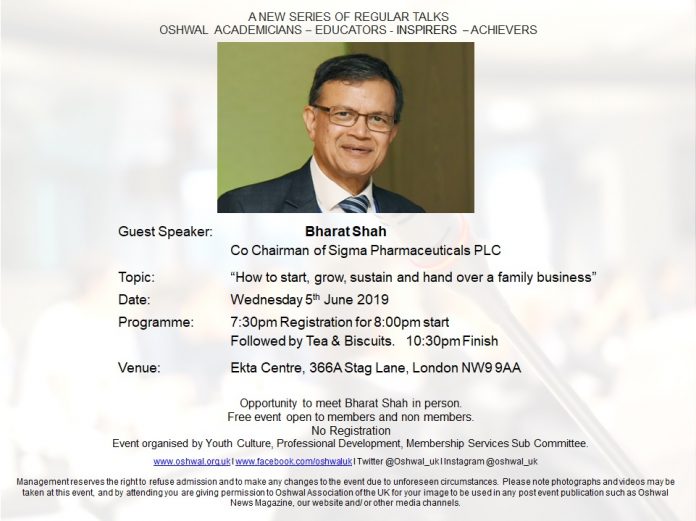 Dr Bharat Kumar Hansraj Shah was born on the 20th December 1949 in Nairobi, Kenya. He is the eldest son of the Late Hansraj Devraj Shah, a successful Indian businessman who was prominent amongst the thriving Asian diaspora living in Kenya due to his business and community work.

Bharat started his infant school journey at the Oshwal Nursery School in Nairobi, way back in 1952, and at the age of 7, he completed his Standard 7 at the Oshwal Primary School. He then went on to study at the Duke of Gloucester School from 1961 – 1965 (now called the Jamhuri High School).

He arrived in the UK in 1966 and enrolled at Bath Technical College to do his A Levels which he finished in 1968. He then joined Bath University to study for a degree in Pharmacy. Whilst at Bath, he was awarded the coveted Ferris Gold Medal for academic excellence. The ‘rest is history’ as they say.

If the truth be known, he was always attentive to his father’s teaching and from a young age he quickly developed a knack for spotting business opportunities, starting with his father’s growing textile business.

However, the attraction of the west beckoned and the overwhelming call to develop the family business and his obvious leanings towards pharmacy led him into the world of retail.

After graduation, he began practising as a pharmacist, first in Kenya for a brief period, and then moving back to the UK to set up his own pharmacy, which later led to a distribution business which began at the back of a small pharmacy shop in Watford, Hertfordshire. He started to distribute generic drugs as a wholesaler, serving the independent pharmacy sector. He was initially joined by his brother Manish who soon became the financial brains of the fledgling company, and later joined by his younger brother, Kamal, who looked after the growing warehouse and was later to become the Director responsible for OTC.

That initial start-up, has now developed into one of the UK’s leading pharmacy wholesalers under the name of Sigma Pharmaceuticals plc. The multimillion pound business is reckoned to be the largest independent pharmacy wholesaler in the UK.

Over the years, the company has won numerous national awards for growth and success with Bharat collecting quite a few personal awards for his skill and endeavours in business entrepreneurship. Recently Bharat won the JITO Award 2018 for the best ‘Family Business’.

Legacy and hand over is a vital part of the business, and the ‘second generation’ family are already part of the growing operation, each playing a key role in the company infrastructure.

Bharat says, “Our vision, as a family, has always been to smoothly integrate our children and our grand-children into the fabric of what we have created. It is our wish and prayer that they will run this business with skill and professional integrity for the greater good of those we serve”.