IN LOVING MEMORY OF

It is with the deepest sadness that we announce the peaceful passing of our beloved Dhiren.

Son in law of:

Brother in law of:

From humble beginnings in Moshi, at sixteen Dhiren moved to the UK alone. He went on to scale great heights in his career, which took him to all corners of the globe. He was highly regarded by all those he met.

His positive, “can do” attitude and mental resilience are inspirational qualities – even in his 60s, he pushed himself beyond any physical limitations to ascend both Mt. Kilimanjaro and Everest Base Camp.

His desire to help others was illustrated by various charitable endeavours – as current Treasurer for Oshwal and former Treasurer of Shishukunj (1997 – 2000).

We are raising funds for the National Brain Appeal in his memory:

Funds raised will go directly toward the National Hospital for Neurology and Neurosurgery, and the UCL Queen Square Institute of Neurology.

You inspire us every day.

Condolences can be sent to dhirensummaria@gmail.com

More information, photos and videos are available on www.dhirenshah.co.uk

Funeral to be held on Saturday 15th February at 11am:

Charitable donations only – to the National Brain Appeal here 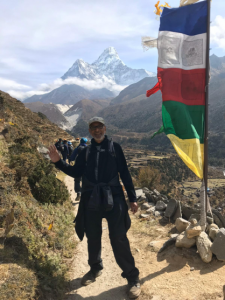