It is with deep regret that we announce the death of Late Mahendra Kachra Haria on 22nd September 2021 of Bounds Green, London.

He was Husband of Bhanumati Mahendra Shah

He was Grandfather of Jeshal and Maahi Vadgama

He will be dearly missed by all.

Prathna Sabha will be held on Saturday 25th September 2021 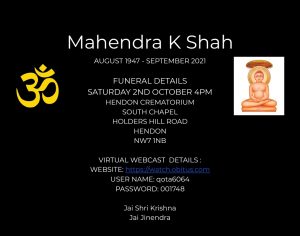 May his soul rest in eternal peace