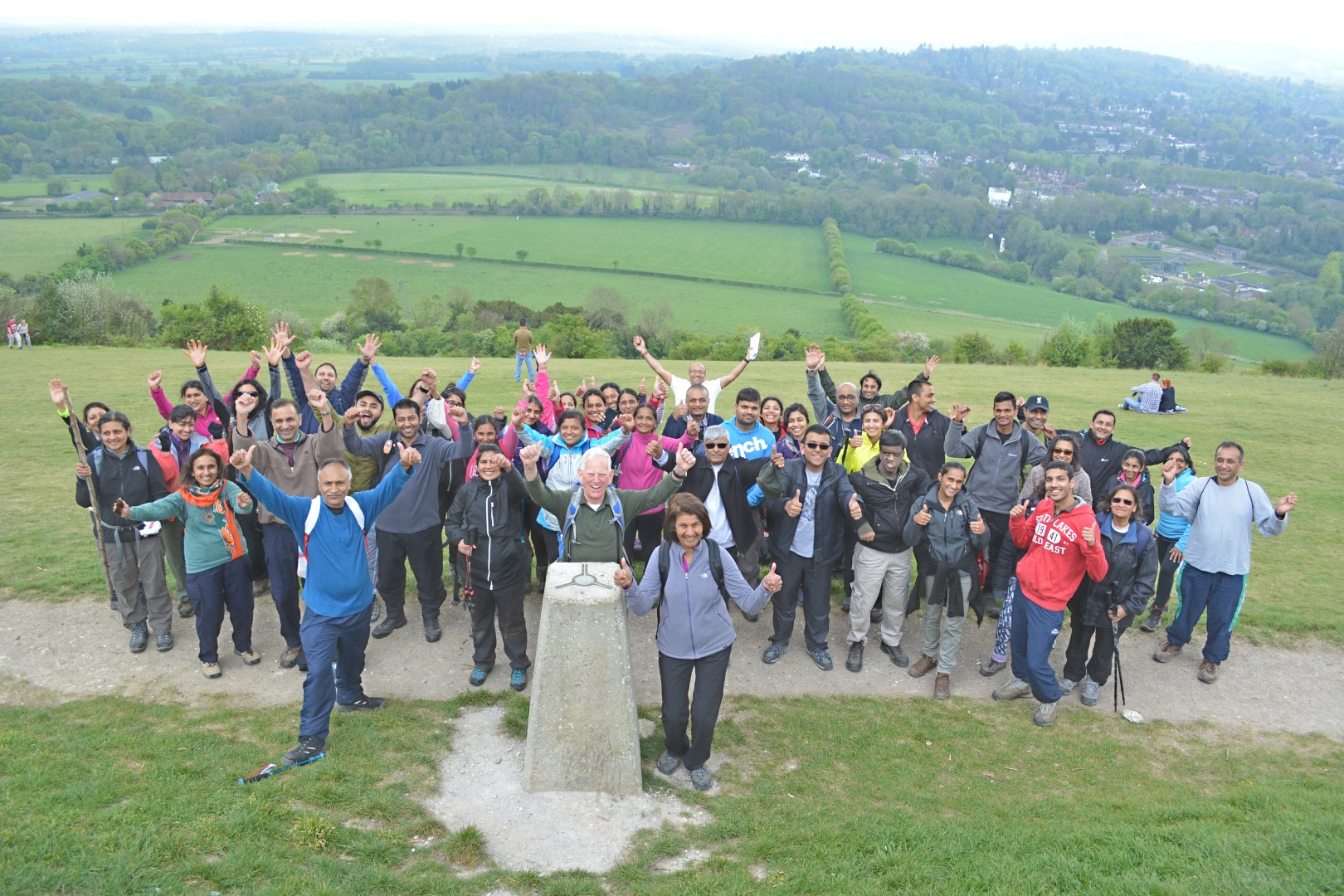 In the midst of political confusion and an upcoming determining general election, a group of enthusiastic Oshwals found themselves deep in Tory heartland.  Box Hill is beautifully managed by the National Trust and lies within the Surrey Hills Area of Outstanding Natural Beauty.

With a wide range of ages and hiking abilities, we all greeted each other with smiles and enjoyed a lovely warm-up with lots of “Oh yikes, my knees!”  Everyone appeared to be prepared for the unpredictable British weather with plenty of bright waterproof jackets in sight.  Some had also brought hiking sticks with them.

Suraj Shah, was our lead volunteer for this trek, having done is before. We set off at a comfortable pace finding plenty of people to have a chinwag with along the way.  It didn’t take us long to pose altogether for our first picture.  Sure enough, the 50 of us were all big smiles in this picture, but we were wondering what the final picture would look like once Box Hill was done with us!

There were plenty of familiar faces along with some new ones as well.  Some people came with their families, some with their friends and some were even flying solo.  It didn’t take long for us all to become familiar with one another.  It was great to see people walking with different people along the way discussing topics ranging from the upcoming elections to the best recipe for delicious Ragda Petis!

Following a flat gentle beginning, we were slowly introduced to Box Hill’s infamous inclines.  There was plenty of encouragement along the way and the group continued onwards.  The weather appeared to be holding out for us, and we were even treated to a ray of sunshine or two.

After continuing our journey for around 3 hours, there was a steep incline to conquer before enjoying lunch.  The clouds finally parted and we enjoyed basking in the warmth of the sunshine.  There were plenty of sandwiches, theplas, grapes, nuts and crisps circulating around.  Ashish provided further information regarding the upcoming Snowdonia hike and encouraged us all to sign up ASAP (4G permitting!).

After fulfilling our petni puja for 45 minutes, we began the final leg of our journey.  Plenty of pictures were taken along the way against a backdrop of the beautiful British countryside.  We were all fascinated by an abandoned car on the narrow pathway, since there was no conceivable way for the car to end up there.

The end was finally in sight, and we ascended a steep hill to reach Salomon’s Memorial viewpoint.  Spectacular views over Dorking and the North Downs greeted us, whilst we waited for everyone to complete the 13km hike.  We sat in contemplation, enjoying the jelly beans which were being passed around by the naughty dentists.  Thankfully, we were all still big smiles in our final obligatory viewpoint photo.

We would all like to thank the organising team, without whom we couldn’t have enjoyed a splendid day at Box Hill.  We hope to see you join us at Mount Snowdon.