Vijay Shah is an explorer, filmmaker and aerospace engineer from the UK. In 2017 he was a candidate on the BBC documentary series ‘Astronauts: Do You Have What it Takes?’.

Vijay’s desire to explore has led him to some of the furthest corners of the globe. He has guided expeditions for British Exploring, solo climbed several high altitude mountains in the Andes and opened up a new route traversing the remote Penny Ice Cap on Arctic Canada’s Baffin Island facing temperatures down to -60C.

Through his travels Vijay has experienced some of the most diverse communities across the world; he was invited to attend the largest human gathering that has ever occurred, meditated for 10-days in silence in the Himalayas and lived for a month with an Indigenous Andean community in the Ecuadorian Andes.

Having spent over three years travelling and on expeditions across the world he has witnessed firsthand how the climate is changing and the tremendous and shocking effects it’s already having on communities and wildlife alike.

Since 2010 Vijay has been giving keynote lectures and talks on the effects of climate change advocating for the urgency of immediate action. 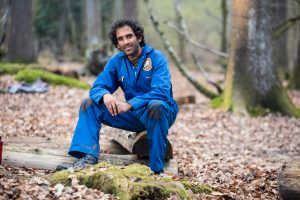